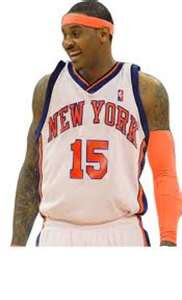 
Anthony will go to New York, along with Chauncey Billups, Shelden Williams, Anthony Carter and Renaldo Balkman. As part of the deal, the Knicks will send Anthony Randolph, Eddy Curry and $3 million to Minnesota in exchange for Corey Brewer. The Knicks have not yet decided whether to keep Brewer or flip him in another deal. They have several trade possibilities in the works as they approach the N.B.A.’s Thursday trading deadline.


Anthony, a Brooklyn native who has been pushing for a trade to the Knicks, is expected to sign a three-year, $65 million extension upon completion of the deal.

In New York, Anthony will join Amar’e Stoudemire, a close friend, to form one of the N.B.A.’s top scoring tandems and the most electric Knicks pairing in decades. Stoudemire joined the Knicks as a free agent last July and has been lobbying for other stars to join him.  Stoudemire has already transform the Garden into the Garden of old by bringing back some of that electricity that been absent for the last decade.  By bringing these two stars together, the Knicks have position themselves to be very successful the near future and with addition of another star player such as Chris Paul or Deron Williams, who are free agents in 2012, the Knicks will be real contenders for a championship in 2 years. But for now, they should be a very exciting team to watch and a nightmare for the opposition on any given night.
Posted by Vegastar Magazine
Email ThisBlogThis!Share to TwitterShare to FacebookShare to Pinterest
Labels: sports
Newer Post Older Post Home