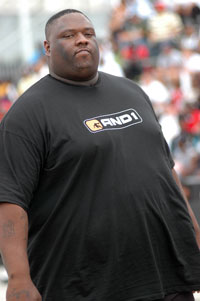 The 6-foot-10, 400-pound Jackson, 35, was in Los Angeles for NBA All-Star Weekend. The cause of death is unknown pending an autopsy.
"Escalade" Jackson, a Jamaica, Queens native, who played at Cardozo High School coached by Ron Naclerio, then played college basketball at Louisville.  Jackson became one of the most famous streetball players of all time with the And 1 Mixtape Tour, a traveling basketball exhibition he joined in 2002. He also traveled for two years with the Harlem Globetrotters and most recently competed with the Ball Up streetball team.
"He traveled all around the world and touched so many lives," Mark Jackson told The Post from Los Angeles. "He will be greatly missed. Thanks for all your thoughts and prayers. God is still good."
Many former and current NBA players, including Shaquille O'Neal and Rick Fox, gave condolences yesterday on their Twitter accounts.
"My heart goes out to Mark Jackson and his family who lost his brother last night, Escalade," O'Neal tweeted. "We lost a great person love u escalade. I'm sad."
Off the court, Troy Jackson, who appeared on the cover of Sports Illustrated's June 13, 2005 issue, was an advocate for STD prevention after losing his other brother to AIDS in the 1980s.